The reputation of the manufacturing industry isn’t always a flattering one.

When thinking about manufacturing, many people conjure up cliché, dated images of a male-dominated, low-paying labor force executing backbreaking work day after day. They think of empty factories and a fleeting industry.

However, the number of available jobs, the types of jobs and the types of workers employed in those jobs have certainly changed over the years.

Masterson Staffing Solutions has helped workers find jobs in the manufacturing sector for 50 years, so believe us, we’ve heard all the myths. This article will deconstruct four of those common myths and misconceptions surrounding the manufacturing industry and separate fact from fiction.

One of the most common misconceptions about working in manufacturing these days is that workers aren’t compensated well—a notion that is simply not true. According to the most recent congressional report, hourly wages have risen 17% higher in manufacturing than in other industries.

In addition to increased wages, the congressional report noted that medical and retirement benefits were more likely in manufacturing than in other service-sector jobs.

2. The American manufacturing job is gone

Another myth about manufacturing is that there is a shortage in jobs. Though many manufacturing jobs have been indeed been lost oversees and to automation over the years, the industry is still responsible for 12% of the United States GDP and employs 12.3 million workers.

A survey conducted by Deloitte and The Manufacturing Institute showed that 67% of manufacturers reported a shortage in available talent. This tells you that the manufacturing industry is looking to fill plenty of jobs to add to the already impressive 12.3 million-strong workforce.

3. Only for unskilled laborers

This myth is closely connected to Myth No. 2 above. Manufacturing has always required highly-skilled workers to operate complex and expensive machinery, and with the influx of technology and robotics entering the industry that remains the case today.

In the Manufacturing Institute study mentioned above, the report found that developing workforce skills was of the highest priority for the manufacturing industry as a whole, stating: “Our education system must also do a better job aligning education and training to the needs of employers and job-seekers.”

From attention to detail and critical thinking to an aptitude for technology, manufacturing companies require a highly-skilled workforce that is ready to learn.

Another myth attached to manufacturing is that it features unsafe working conditions. But working in manufacturing today is healthier and safer than ever before.

The increased safety is a consequence of a heightened concern for environmental awareness and government mandated health and safety regulations. Also, the implementation of technology such as robots, drones, self-driving vehicles and augmented reality have led to huge safety gains.

The Opportunity is There

Much like the notion that Pluto is a planet (it’s a dwarf planet) and that Napoleon Bonaparte was short (at 5’7” he was above-average height for his time), there are several contagious myths about the manufacturing industry that are simply untrue.

Want to learn more about enjoying a career in manufacturing? Discover 6 skills that you need to be successful in a manufacturing job. 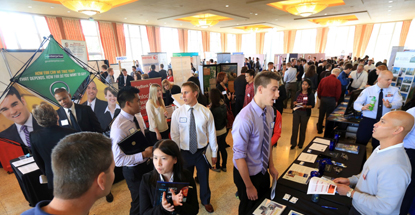 9 Tips for a Strong Video Job Interview During COVID-19

If you’re new to working remotely, you may still be adjusting to the way we communicate during COVID-19. While some states are slowly returning back to work, how we conduct business may change. One of the biggest changes that may take place is an increase in video interviews, which can be daunting if you’re the … END_OF_DOCUMENT_TOKEN_TO_BE_REPLACED

How to Get Over Job Search Fatigue

When you’re having trouble finding a job, it can be difficult to not feel burnt out. Many people get discouraged after trying for weeks, even months, and just want to give up. If this is the case you’re facing, know that it is extremely common and that there are ways to get out of it. … END_OF_DOCUMENT_TOKEN_TO_BE_REPLACED

7 Tips to Prepare For Your Next Job Interview

You should value each job interview as an opportunity to put your best foot forward and impress. In order to make the best impression, you need to do your research beforehand. The more you know about the company, what their pain points are, and how you can be an excellent team member, the better chances … END_OF_DOCUMENT_TOKEN_TO_BE_REPLACED

We use cookies to understand how you use our site and to improve your experience. This includes personalizing content and advertising. We use information you provide us through the forms on the site in a method consistent with the reason for the form. By continuing to use our site, you accept our use of cookies and information. For more information, please read our Privacy Policy